Sarah was one of only five Scots in the team for a competition in which each of the 12 countries taking part fields one competitor in each event. Points are awarded 12 to the winner and so on down to 1 for finishing 12th. 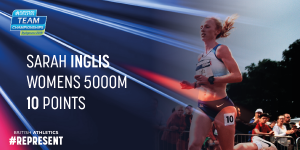 For most of the race Sarah was content to sit in second place in a four runner breakawy group behind leader Liv Westphal of France, it wasn’t until the last 800 metres that the pace stepped up a gear and at the bell it was still all to play for. It was Germany’s Hanna Klein who made the decisive break and pulled clear to win in [15m 39s 00s]. In the battle for second place Sarah [15:45.23] just lost out to Spaniard Maintane Melero 15:44.45.

For Sarah, it was a return to the city where she won her first GB vest back in 2010 at the World Cross Country Championship. On that occasion she competed in the Junior Women’s race. Last month she was part of the GB team which won the Europa Cup 10,000 metres Championship in London.