In the Open 800 metres handicap race at an extremely muddy Stirling Highland Games it looked as if Ron Loewen [70m] had timed his run to perfection, after reeling in the field he only had Rory Dowd Oban[100m] to pass, as they entered the home straight he moved onto his rivals shoulder and looked set for victory only for Dowd to find a bit more and force himself over the line in first place. Loewen took second with David Allan Clydesdale AC[100m] in third. 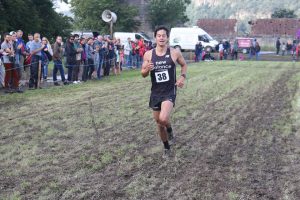 Ron wins the 1600 metres handicap at a muddy Stirling

The Canadian who has been running for LRC over the past month and competing on the games circuit finally won a race. Again starting from the backmark of 90m he came through the field to take the tape in 5m 09s with the figures again emphazising how testing the ground was. Rory Dowd[125m] finished runner up with Rebecca Burns[240m] Edinburgh AC in third. Ron competed in his final games at Crieff on Sunday where he finished 5th in both the 800 metres and 1600 metres handicaps.