On finishing the Bank of AmericaChicago Marathon at the weekend Lothian Running Club’s Stewart Laing was reaching a personal milestone for the 26.2 miles distance.
Stewart who crossed the finish line in 3 hours 7 minutes 30 seconds has now completed all six Marathon Majors following runs in Tokyo,Berlin.New York City, Boston and London. His achievement follows  in the footsteps of club mate Shona Young who completed her Majors portfolio in the recent Berlin Marathon. 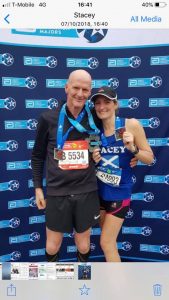 Taking part in the event with Stewart was his daughter Stacey who was running her first ever marathon and excelled to finish inside 4 hours stopping the clock at 3h 53m 52s.
Gerry McCafferty also represented LRC in the race and finished just outside his PB in 3h 36m 46s.