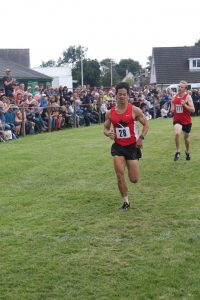 24 hours later at the Bridge of Allan Highland Games which is widely regarded as one of the top athletics meetings on the games circuit Ron ran both the 1600 metres and 3200 metres handicaps starting from the backmark on both occasions. The handicap proved just too much in the 1600 metres where despite coming through strongly on the last lap he had to settle for 3rd place behind winner Jack Wood, Ilkley Harries to whom he was giving 65 metres of a start. The 3200 metres saw Wood penalised and pulled back to start only 10 metres ahead of Loewen. Throughout the race there was never more than a few metres between the pair as they reeled in their rivals. At the bell it was still all to play for and despite a valiant effort from the Canadian he was unable to bridge the gap between himself and the talented English athlete who maintained his form all the way to the line, the leading pair crossed the line to the cheers of the appreciative 8000 crowd who had witnessed a great race. Despite no wins over the weekend it was still a profitable one.