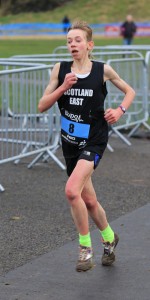 Chloe in action at Inter-DistrictCh

Max McNeil in the Senior Men’s race and Chloe Cox and Sarah Inglis in the Senior Women’s event. The District races were incorporated into the Great Edinburgh International Cross Country fixture.

In the 8k men’s race, Max produced an excellent run to place 13th overall of the 36 runners and 2nd Under-20 covering the undulating and muddy in places course in 27 minutes 31 seconds.

The first six finishers in each team count towards the team points, Max was 6th finisher for the East team who agonisingly lost out by a solitary point to the winners West.
TEAMS

In the Women’s 6k race Chloe Cox and Sarah Inglis came home in 13th and 16th positions respectively and 7th and 8th for East, which was just just outside the points counting places for the team. Their team mates however packed closely ahead of them to take the Women’s title. Chloe’s finishing time was 24 minutes 02 seconds with Sarah not far behind in 14m 15s. 30 Ran.