Sarah Inglis made a welcome return to competitive action with a podium place finish in the Vancouver BMO St Patricks Day 5k in Stanley Park. Inglis has been on the sidelines after picking up an injury following her run in the Synchrony Rock n Roll Half Marathon in Arizona in January. She showed no ill effects however after turning in a fine performance in finishing in third place behind Canadian duo Natasha Wodak and Rachel Cliff who will represent their country in the forthcoming Commonwealth Games in Australia. 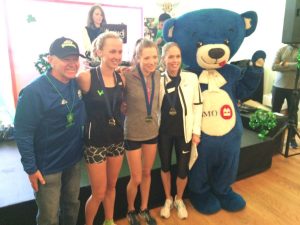 Such was the high quality of the field, the winner recorded a new course record of 15 minutes 39 seconds and seven other females all broke 17 minutes for the 5k. Sarah’s time of 16m 27s was just outside her road PB of 16m 16s which she set last September in the Canada 5k Road Championship in Toronto. Her time was however 25 seconds quicker than her only other previous run in this race in 2014 when she also finished in 3rd place behind the same two girls, only their placings were reversed.