Lothian Running Club’s Sarah Inglis set a new course record on her way to winning the Scottish 10 Mile Championship at the 56th edition of the Tom Scott Memorial Road Races on Easter Sunday.
The championships which were again being held at Strathclyde Park had earlier in the week set a new entry record for the fourth successive year and saw both the Men’s and Women’s champions eclipse the previous records with outstanding running on a chilly but still Easter Sunday morning. 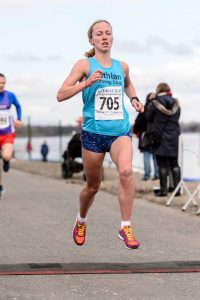 Inglis arrived as one of the favourites in the Women’s race and didn’t let her supporters down, running superbly to cross the line in 55m 34s to claim the 10 Mile title taking 16 seconds of the previous course record set by Fionnuala Ross two years ago.
Crossing the line in second was National XC champion Mhairi MacLennan of Inverness Harriers in a time of 56.31 with 2017 Scottish 5k champion Annabel Simpson of Fife AC back in third in 57.52.
Sarah’s time was also a personal best for the distance bettering her previous mark of 61.50 set in 2012 in the Frank Duffy ’10’ in Dublin, it also elevates her to the top of the GB women’s rankings for 10 mile.
Back home in Scotland for a spell from her current base in Vancouver, Canada, Sarah has enjoyed a successful couple of weeks on the roads having helped the Lothian RC ladies team to silver medals in the National 4 stage road relays in Livingston the previous week.
There was further LRC success in the women’s race with Shona Young picking up the prize for the leading over-50. Finishing 34th of the 125 female competitors Shona similar to Sarah recorded a PB with her time of 72m 50s almost 2 minutes faster than her previous best figures of 74.49 set in the Arbroath Smokies Ladies only 10 mile race in 2014.
The leading Lothian member in the Men’s race was Malcolm Lang who finished in 31st place of 260 finishers in 55m 59s, he was followed over the line by club mates Colin Partridge 71st in 59.55 and Jim Alexander who was 283rd in 80.52.
Luke Traynor,Giffnock North set a new course record of 47.59 in winning the race.
Full results:
http://www.runbritainrankings.com/results/results.aspx?meetingid=233993