Running in the colours of Great Britain & Northern Ireland Sarah Inglis proudly represented Lothian Running Club in the Euorpean 10,000 metres Cup in London on Saturday evening. And in doing so picked up a team gold medal as part of the six member squad of the women’s team. 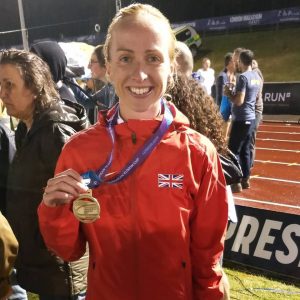 The race which was incorporated into the Night of 10,000 metres PB’s meeting at Parliament Hill in Highgate has an inovative format Over the years the atmosphere developed as spectators took ownership of #Lane3BeerNCheer ethos, circus entertainment,‘lactic tunnels of love’, a home straight pedestrian bridge, infield spectating, live music, back straight DJ and Legends Seminar. It has been described as the Glastonbury of the 10,000 metres. The world’s most exciting track meet. The future of athletics.

On what was a great night for Scottish Athletics the race was won by Stef Twell[31:08.13] who took the British title as she wasn’t representing GB & NI.

Full results can be found here.

Oct
17
Sun
10:00 am Dechmont Law Junior Training
Dechmont Law Junior Training
Oct 17 @ 10:00 am – 11:00 am
“A free activity session for youngsters of any age, led by qualified athletics coaches, in the attractive Dechmont Law Country Park.  Meet every Sunday at 9.50, in the Dechmont Law Car Park behind Deans...
Oct
19
Tue
6:45 pm Tuesday Intervals Training
Tuesday Intervals Training
Oct 19 @ 6:45 pm – 8:00 pm
Club Training Sessions may be put on hold for the moment, but that’s no excuse to skip training.  We will continue to post virtual session on a Tuesday and Thursday so that people have...
7:15 pm Junior Training Session
Junior Training Session
Oct 19 @ 7:15 pm – 8:30 pm
Welcome to Craigswood –  I appreciate its a little late on a school night but it’s a more secure and appropriate venue than using a shared public space . Enter by gate in Front...
View Calendar