At the ESPG Scottish Indoor Championships at the Emirates Arena in Glasgow Robbie Kennedy produced probably his best ever performance in reaching the final of the Senior Men 800 metres. 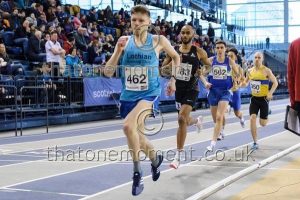 A fortnight earlier at the same venue he recorded a new personal best for the 1500 metres and on this occasion twice lowered his figures for the 800. Running in heat 1 Robbie finished 4th in 1 minute 58.26 seconds which qualified him for the final as a fastest loser. This was the first time he had dipped under 2 minutes. In the final he knocked off another 100th of a second when finishing in 6th place in 1:58.25 behind winner Grant Muir,Giffnock 1:54.78.